Update.  Enclosed now, in beautiful ruby red plexi from eStreet plastics.  Also added two relays, simply for sound effects.  See video below.  Life generations progress faster upon every iteration, speed maxes out at 100 generations.   Max generations are 65k, upon which an integer rolls over and a new simulation is started.

Code almost done, still some tweaking needed.  Enclosure is next.

While building another 7-Segment LED display for a project I took some photos.  I've been asked by some for more detail on how those things are build and chained together.  This is the same style display I used in the Game of Life display from an earlier post.   These modules are assembled each with a 74HC595 shift register glued to the back "dead bug" style.  Each segment is driven by a output bit thru a resistor.   It makes for a very simple static (no scanning or multiplexing) display and very simply programming in the microprocessor.   I really have to make a circuit board for this!  Displays by the inch anyone? 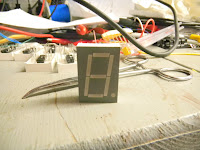 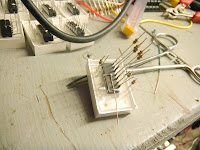 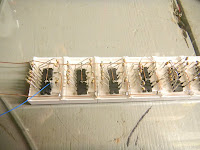 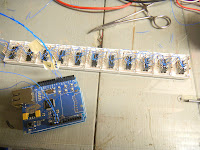 So its been a long while since I've posted anything.  Been busy.

But lately I have been hacking on Arduino projects.  Primarily I have revived my 10x8 7-Segment LED matrix display.   When I built this thing way back in 2004, I drove it with a PC parallel port.   Now I have created a Arduino based controller and coded a Conway's Game of Life simulation.

Each 7-segment display has a 74HC595 shift register on the back, soldered directly to the display using 1/8w 300R as jumpers.  Its all one long shift register, whole thing is driven by only three I/O pins.   Its nice, simple because there is no scanning, but is SUCKS juice.  Very low CPU requirements.

See Photos below, and link to video. 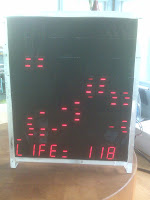 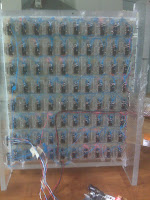 We have been using the VMware Data Recovery Appliance (or trying to) since it was released.  Overall it has been a bumpy road, but the latest release shows a lot of promise.

Improvements in stability are obvious, but we still run into issues where backup jobs stop running for no reason.   This means that you have to monitor somehow, unfortunately there appears to be no good way to automate this.

You are still limited to 100 VMs per appliance, this would be OK if it were possible to attach more than one appliance for management to a VC client session simultaneously.    Even better would be a unified console of some kind.

The 100 VM limitation can be worked around using carefully designed Resource Pools.  The VDR appliance "notices" when a VM has been added to a RP properly.

At this point I would suggest completely skipping CIFS.  It is horribly unreliable.  In fact when you attempt to configure a CIFS destination you are greeted with a warning that in many more words says this.

If your goal is to send VM backups to remote storage, I would suggest a NFS datastore, and using VMDK storage on that.  The VDR appliance seems to deal with this very well.

The total size of the destination dedupe store is still limited to 1TB per destination, and a max (suggested) of two destinations.   VMware's explanation for this suggests performance issues with larger stores.

In our experience, the data deduplication works very well.   You can pack a lot of backups into that 1TB of storage.

The hot-add backup mechanism works very well and created very little I/O impact while running backups.   However, if the appliance does not shutdown properly orphan devices are left attached to the appliance.  These often need to be removed manually.

Overall, the VDR appliance shows a lot of promise.  We would like to see better management, better stability, easier scaling and some kind of monitoring capability are needed.   We would like to see the backup tasks and progress shown in the normal VC task list.  This would help with the monitoring.   A published API would also be helpful for us to write our own NAGIOS plugins.
Posted by @sysMatt at 1/03/2010 01:42:00 PM